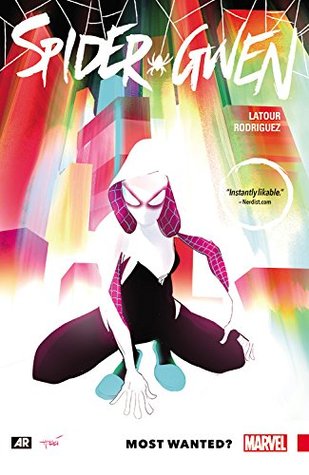 I like it. Not sure if I love it yet. I love seeing a version of Gwen Stacy shine. During this first volume, there are some split-offs. Like the Spider-verse comic happens in the middle. So I felt like a bit of development was missing I think as I haven’t seen her have to deal with that. Seeing another Peter Parker in Spider-verse does affect her visibly, though. In Spider-Gwen’s universe, Peter Parker dies trying to be a hero like Gwen and it is something that you can see will affect her for a long time. Loved the conversations she has in this with May and Ben. They are really a part of her life here.

This is all pre this comic starting which I appreciated. Didn’t feel like I needed a big origin story for her. She got bit by a radioactive spider. We get it. You know the story now move on. I liked that a lot. I feel like it worked for this. The Miles Morales comic I read recently was the same way. I think I’m starting to prefer things in media res for my heroes.

Gwen’s dad is a cop. In this volume, she struggles with her father because she is the vigilante he is supposed to be hunting. I think this will be really interesting going forward.

Spider-Pig exists and it throws me off so much. Like wow. Matt Murdock is a bad guy in this universe. Vulture is pretty hideous. Mary Jane Watson has a band called The Mary Jane’s with a song called Face it, Tiger.She also has such a mean girl attitude, to be honest. Earth 65 is so strange man.

Daredevil as a bad guy is sort of the best thing ever, though, like still blind, Same abilities. Just a total bad guy and I kind of loved it. It was amazing. Like lawyer for the Kingpin. Not to be messed with. Vulture was shaking in his boots. This is not a guy you should cross.

I think I love every Felicia Hardy but this one is so strange and an international star. I love it. Felicia and The Black Cats. I was rooting for her in this one.

Gwen gets many likeability points. Has a cat named murder-face. Is a drummer in a girl band. Like yes. The Mary Jane’s has more drama than One Direction but still. She hallucinates other Spider people. I don’t know how I liked that part but I think I did. It’s a good start. Excited to read more.