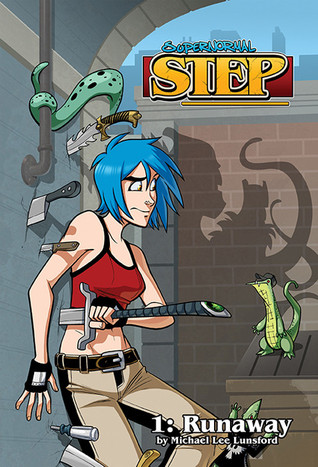 Supernormal Step is about a girl named Fiona who one day gets sucked into another dimension or the parallel world. This world has mutants, talking animals, and magic users. I was really happy to find out this story starts off in media res. Fiona has been in this world for a while. She has some allies and has learned to use the magic of the world. Her allies are trying to help Fiona find a way back home and hide that she is the alien the government has been hunting down. Seeing her origins would have been good but I’ve seen a lot of stories with all the beginning parts like this. It was nice to just fall into it with this story. I also have heard that the character is Aro/Ace. It was my original reason for picking up the comic and I’m glad that I have.

The first volume covers the first three chapters. I wasn’t sure what type of journey Fiona would be going on but I’m starting to see remnants of a hero journey by the end of this volume. Fiona still wants to find her way home but while she’s stuck she starts to go against some of the teachings of her father. Fiona’s father and his teachings may be a big element going further. Fiona was homeschooled and I’m really wondering about her teachings. She knows things that honestly make her a good candidate for being dropped in another realm and on the run. She has some survival instincts. I’m excited to see more about her background.

I’m starting to like our main possible villains. Not sure if that is what the Hendersons will be in the end. Evan and her brother are fun characters. Their dynamics are really great. There are other quirky possible villain characters that I can see myself enjoying as well.

Fiona’s allies, in the beginning, are Val and Jim. They may be why she got sucked into this dimension in the first place. I don’t really get much from Val but he does seem to really want to help Fiona. He helps her figure out the world and I think he must have helped her figure out magic when she got there. Jim is a guy who is usually a talking bunny. It’s some kind of curse. I just loved the little angry bunny being around, to be honest.

This is a really solid intro to this world. I’m so excited to keep reading. Fiona is really intriguing. I wanna see what she has to face next and how she handles it. I want to see what happens with Jim and Val. I want to figure out how much Jim knows. I think that bunny is hiding some things.  Just excited for more Supernormal Step. Let me know if you’ve read the comic and what you thought of it below.